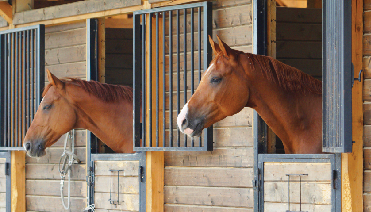 Everyone’s heard of the horse with Chronic Obstructive Pulmonary Disorder (COPD) or heaves but more recently the phrases Recurrent Airway Obstruction (RAO) and Inflammatory Airway Disease (IAD) are being used…are these all the same thing?

In this article, we explain the terms that describe common lower respiratory tract disorders, the differences between them, and introduce you to the latest term, Equine Asthma.

Let’s start with RAO. This was previously called COPD and is also known as heaves. COPD is an old term that we steer away from now as the disease in horses is very different to COPD in humans which is linked to smoking. RAO is the up-to-date term as this better describes the disease process.

RAO is caused by a hypersensitivity to inhaled particles (antigens) which is why the effects of this hypersensitivity reaction are seen specifically in the lungs. The reaction leads to the airways within the lungs becoming inflamed as well as causing extra mucus to be produced. It also makes the muscle surrounding the airways constrict (known as bronchoconstriction). These symptoms cause obstruction within the airways making it harder for the horse to breathe.

Horses can have a very sudden attack of RAO and become distressed due to rapid onset of the obstruction. More commonly, we see the milder more chronic form where there is less obstruction of the airways, however, it still means the horse has to use greater muscular effort to breathe. The phrase ‘heaves’ describes this increase in respiratory effort and in time we start to see a so called ‘heave line’ across the abdomen which is as a result of the respiratory muscles increasing in size with the extra work.

The clinical signs of RAO are often seen when the horse is at rest in the stable, as this is when they are exposed to a greater concentration of the antigens. This is why the disease is more common in winter. The main inhaled particles that cause the hypersensitivity reaction are dust from hay and bedding, mould spores, and other endotoxins found in feeds. The disease is also seen in the summer when the horse has a hypersensitivity to pollens, this is known as Summer Pasture Associated Obstructive Pulmonary Disease (SPAOPD).

The disease process involves a hypersensitivity reaction so we usually see it in middle aged horses and generally the disease does progress with age. It is important to remember that if the horse is managed well they can remain in remission for a long period of time but will always remain susceptible.

So then what’s the difference to IAD?

Inflammatory airway disease (IAD) used to be seen mainly in young racehorses but is now recognised across all disciplines and all ages. It quite simply is when there is inflammation in the airways.

The cause of this inflammation is not as well defined as RAO. It has been suggested that infectious agents may be involved but their role remains unclear; there is definitely a recognised link to environmental conditions, similar to RAO. These agents lead to a disruption of the inflammatory cells within the lungs and lead to airway inflammation and excess mucous production, again similar to RAO.

Generally, the clinical signs associated with IAD are milder to that seen with RAO as the changes in the lungs do not lead to an obstruction to breathing. A crucial difference to RAO is that IAD horses will show no signs of respiratory distress at rest.

The main sign of IAD is exercise intolerance or poor performance with slower recovery times after exercise. Nasal discharge is unlikely to be seen at rest but may be seen after exercise.

Another key difference to RAO is that often we are able to treat IAD effectively and recurrence is low, however we cannot cure RAO currently as the horse will always retain a hypersensitivity to the antigens.

Are these disorders similar to human asthma?

The disease processes of RAO and IAD are similar to that of human asthma, in fact it has been proposed that we include RAO and IAD under the umbrella term Equine Asthma with RAO being more severe and IAD milder. It is important to point out that this does not mean there is a definite progression from IAD to RAO.

Does all this terminology matter?

It is important to clarify specifically what disease process is going on in your horse to allow us to treat your horse appropriately, explain to you how you can best manage the disorder, and give you an accurate prognosis.

From a research point of view, it helps to separate disorders as much as possible so that processes involved can be explored in greater detail. For example with RAO, if we can understand the specifics of the hypersensitivity reaction then we might be able to alter this response in the horse and therefore cure them from RAO. It is useful to keep these diseases closely grouped together as there are clearly links between them which is why the term Equine Asthma has been proposed.

Molecare Farm Vets aim to put your mind at ease – providing total solutions from a single source. Competitive quality services; personalised to the requirements of each client.
View all posts by Molecare →
Sudden death in growing lambs
Abortion in sheep