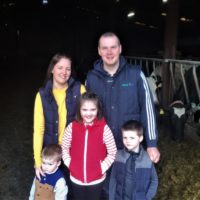 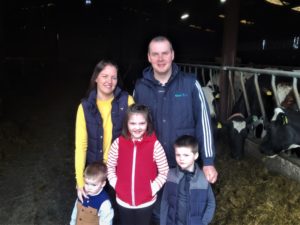 William explains: “My heat detection rates  were decent enough, but then I took the decision to increase my herd size to over 180 cows. I had been tail painting and all of a sudden I was in a position where I was going from a long calving season straight into monitoring for heat detection – the amount of labour it took was becoming uneconomical and unrealistic.

“I initially purchased 80 collars, but quickly took the decision to buy an additional 100. My initial results easily justified the investment and 158 of my herd were AI’d within the first three weeks and out of that 117 held their first AI, giving me a 74% conception rate. I would mostly put this increase in conception rate down to better timing, as HerdInsights tells me when the heat started.

Biggest benefits
“Basically I now have more cows calving. Last year I had a lot of stragglers, this year my full herd is on the system and my bull will be with the cows for a month less. It is as simple as this – for a cow to make money I need her in calf and back out on grass as soon as possible and that’s what the HerdInsights system gives me.”

I am also getting my cows back out to grass a lot quicker. I had 30 cows calve in May 2017; this year I will dry off as usual on 1 December and 80% will have calved within a six week period. In addition I rear calves and as anyone will tell you there is a huge difference between calves born in early February to late May.”

“In relation to health, I am also starting to see real benefits. For example, I had one cow that I received a health alert on long before I would have identified that there was an issue. I contacted the vet, we treated her and she was back milking. I can safely say without that alert at best she would have been dried out over the summer, or would have been culled.”

Results
“Prior to using HerdInsights, I had 16/17% of my herd not in calf; that figure is now down to 5.5%. My figures are moving from average rates to top herd figures. All of this has been achieved using a system which has been really straightforward and easy to use.”

Summary
“To become economically efficient I needed to expand my herd, but the effect of that on my labour requirements was huge. I needed a solution and will admit it was daunting to invest in such relatively new technology, but I have more than achieved my goal; I’ve reduced labour and gained financially…the figures speak for themselves.”

For more information on HerdInsights, call Moletech today on 01392 873265 or email [email protected]

Molecare Farm Vets aim to put your mind at ease – providing total solutions from a single source. Competitive quality services; personalised to the requirements of each client.
View all posts by Molecare →
Control and prevention of sheep scab
Career Opportunities