Laminitis is one of the most dreaded equine issues among horse owners and vets alike. It is brought up in conversation all the time in the horsey world, yet there are still many owners who do not understand why it affects their horses.

Laminitis, by definition, means damage to, inflammation or failure of the laminae in the hoof. Laminae are soft tissue connections running between the hoof wall and pedal bone. When they break down, this allows the pedal bone to rotate, and possibly sink, in relation to the hoof capsule. If able to diagnose promptly, these changes can be slowly corrected with remedial farriery. 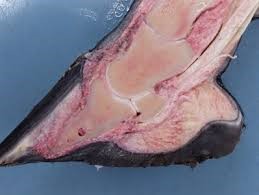 Dissection of a horse’s hoof with fatal laminitis, showing the pedal bone rotating and descending through the sole of the hoof.

Symptoms to look out for

The most common sign of laminitis that we deal with is foot pain. This can vary from being a bit ‘pottery’ on uneven or hard ground, weight-shifting between front feet or all four limbs, abnormal stances (as though your horse is trying to stand on a post), recumbancy and unwillingness to stand and weight-bear.

More subtle signs include changes to the structure of the hoof: stretched white lines, uneven dorsal hoof wall rings, hoof wall flare and bruising. Your farrier should pick up on these changes.

If you notice any of these symptoms in your horse, please contact your vet as soon as possible. The earlier we detect and treat laminitis, the better the chances of recovery. 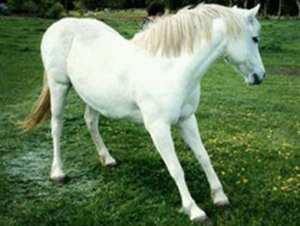 So what actually causes Laminitis?

Laminitis can occur as a result of a primary inflammation, such as colitis, peritonitis, retained foetal membranes and carbohydrate overload, to name only a handful. The horse will be systemically ill (raised temperature, dull/depression, possible diarrhoea, etc) and can develop laminitis, even if we treat primary symptoms.

Supporting limb laminitis can occur with, for example, a fracture or septic joint where the opposite limb is weight-bearing for an excessively long period.

Endocrine disorders (hormonal or metabolic) are estimated to cause 90% of laminitis cases. There is a lot of talk on Pituitary Pars Intermedia Dysfunction (PPID), or more commonly Equine Cushing’s Disease, and Equine Metabolic Syndrome (EMS) playing an increasingly bigger role in laminitis. As vets, we are trying to highlight these two disorders in the equine world, so we shall go into a bit more detail so as to explain…

We consider horses to have EMS if they are obese, have Insulin Resistance (IR) and/or are prone to laminitis. IR is quite complex, but in simple terms: glucose is not taken up by the cells of the body, despite insulin (which causes glucose uptake) being present in the bloodstream. This leads to abnormally high levels of glucose in the bloodstream. The horse releases more glucose which causes excessive insulin levels (hyperinsulinaemia). By a series of unknown mechanisms currently under investigation, this leads to laminitis.

Horses could have a genetic predisposition for IR, those designed to survive harsh winters or drought. Examples are native ponies, Arabs, Iberians and Haflingers, to name a few.

More commonly, it is a combination of overfeeding, lack of exercise and the elimination of seasonal weight loss due to unnecessary thick rugging and easier access to good quality feeds over winter, that lead to EMS becoming an issue.

Dysfunction of the pituitary gland causes PPID, found at the base of the brain. Dopamine regulates its hormonal secretions. Horses with PPID don’t produce enough dopamine, which leads to dysregulation of hormones. One of these hormones is ACTH. We are still not able to fully understand how laminitis and PPID associate with eachother, and research is constantly underway. It usually affects older horses and ponies (10 years old and over). Symptoms of this disorder include:

Fat pads around the eyes

Increase in drinking and urination 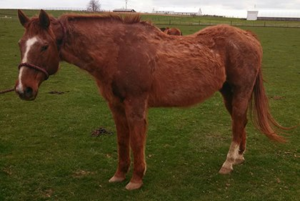 A horse with advanced PPID.

We can diagnose both PPID and EMS by simple blood tests. Once we are able to confirm either or both disorders, treatment involves specific medication for PPID and strict management changes for both. Treatment is highly successful and usually life-changing (for the better!) for horses and owners.

As vets, our goal is to prevent laminitis before any symptoms arise. This is why we routinely blood sample horses 10 years old and over for PPID, even if they appear clinically normal, and any overweight horses/ponies for EMS. A horse with subclinical PPID will show no signs, but will have changes on blood results. The first symptom in such cases is usually a nasty bout of laminitis. Hence our urge to diagnose diseases early on.

For further information regarding EMS, PPID and laminitis, please contact your local vet.

Molecare Farm Vets aim to put your mind at ease – providing total solutions from a single source. Competitive quality services; personalised to the requirements of each client.
View all posts by Molecare →
The move to eradicate BVD
Coccidiosis in Lambs