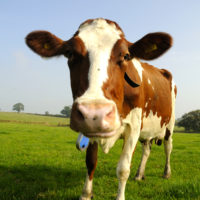 With summer fast approaching, Lungworm (Dictyocaulus viviparus) is a parasitic roundworm which both beef and dairy producers should have in mind. Cases tend to peak around September, but can occur anytime from June to early December. If Lungworm doesn’t sound familiar, common terms used for this parasitic infection are ‘husk’ or ‘hoose’, referring to the sound of the cattle coughing when infected.

Why worry about lungworm?

Loss in growing cattle has been estimated at £50-£100 per head, and when producers are dependent on consistent growth rates for efficient production, this can be disastrous. Adult dairy cows can equally have their milk production affected to up to £3 per cow per day.

Which animals are most at risk?

Outbreaks are most commonly seen when naïve animals are exposed to the parasite for the first time, having no immunity, therefore being completely unprotected.

Autumn born, single suckled beef calves are particularly at risk as they graze in summer. Spring-born suckler calves on the other hand, are less at risk because they tend to still be suckling the dam during the risk period.

Unfortunately, lungworm outbreaks are often unpredictable. Many farms will have lungworm present, but it takes a specific course of events for an outbreak to occur. The majority of adult cattle will have been exposed to lungworm at some point in their lives and will therefore be immune to the disease, but can still be infected if the parasitic burden is abnormally high.

How will I know if my cattle are affected with lungworm?

Lungworm should be suspected in any young cattle coughing at grass. Clinical signs include an increased respiratory rate, extended neck and bouts of coughing (hoose). Severely affected cattle may even be reluctant to move. Diagnosing lungworm can be done by identifying larvae in faecal samples, blood testing or through post mortems to reveal lungworm in the lungs.

Where does lungworm come from? 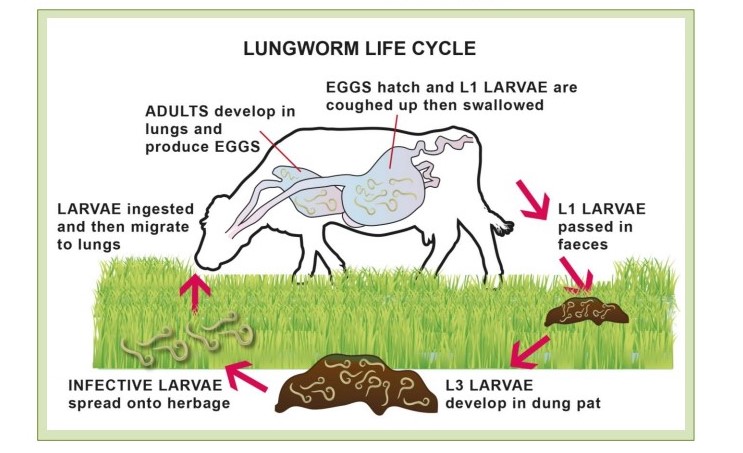 As shown in the picture (courtesy of COWS.org.uk), larvae (L1) are excreted in cattle faeces. The development process usually takes 5-7 days in the faeces (to L3), but can be much longer depending on environmental conditions. The west of the British Isles are particularly at risk due to the wetter weather favouring this part lungworm’s life cycle.

When cattle ingest infective larvae (L3), these migrate towards the lungs to develop into egg laying adults. The eggs are coughed up and swallowed, passing through the digestive tract to be excreted in the faeces as larvae (L1). This cycle will occur multiple times before sufficient larvae accumulate on the pasture to cause clinical disease, usually between July and September.

What should I do if I have lungworm on my farm?

When you have animals showing clinical signs, separate them from the herd and provide them with a stress free environment. Early treatment is essential because once there are dead or dying larvae in the lower airways, some animals may not respond to treatment and symptoms may get worse. To prevent reinfection, cattle should be moved from dirty pasture onto clean or into well-ventilated housing.

Molecare Farm Vets aim to put your mind at ease – providing total solutions from a single source. Competitive quality services; personalised to the requirements of each client.
View all posts by Molecare →
Protect your horse from flies
Mitigating the risk of blue tongue