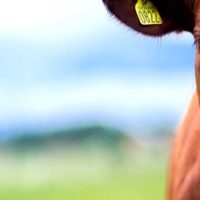 Traditionally within farming the selecting of a replacement heifer has often be done through assessing frame size and weights, however research and experience has shown that neither have a direct correlation to their ability to calve without assistance.

However, research has shown that the pelvic area has a moderate heritability, and for those farmers who are looking to select easier calving heifers, the Rice Pelvimeter can be a helpful tool.

Developed in the US, The Rice Pelvimeter is a caliper-style device used to determine internal pelvic measurements in beef cattle. Research in the states has shown that combining its’ use with selecting animals who produce smaller calves i.e. low birth weight, can greatly reduce the incidence of difficult calvings by up to 60%, and those who do not pass the measurement criteria can be identified and removed from the replacement group (breeding programme).

The use of the pelvimeter is confined to identifying heifers with abnormally misshapen or small pelvic areas which will be at greater risk of calving difficulties.

These difficult calving’s cost money, both directly and indirectly.  From dead calves, veterinary costs and increased labour to increased culling from reduced fertility.  Margins are becoming tighter for suckler producers so it is important to focus on maximising production.

The process of a pelvimitry exam involves taking a rectal measurement of the pelvis, with the measurements taken of both the horizontal width and vertical height. These two numbers are then multiplied to get the area in cm².

The research has shown that heifers with a small pelvic area, which is defined as less than 140cm² at 13 months of age should not be kept as a replacements.  As pelvic growth is fairly constant between the ages of 9-24 months, it allows for pelvic measurements to be taken at any time and calculated according to age.  Continental cattle have an average growth of 0.30cm² per day, whereas native cattle growth at 0.25cm² per day.  In practice, measurements are normally taken no earlier than 13 months of age, with the aim for the animal to calve at 24 months.

During such visits to measure the pelvic areas of a group of heifers, a pre-breeding check should also be performed by the vet, also known as reproductive tract scoring.  It involves scanning both ovaries and the uterus to grade how fertile the animal is.  This can prove useful for picking out sub fertile or cystic animals prior to being put with the bull, and removing those that do not meet the grade.

Taking an active approach to heifer selection and working with your vet to review these measurable traits will help to mitigate problems such as difficult calvings in the future.

To find out more about this service, or to speak with a vet about your heifer selection process, call Molecare on 01392 873934

Molecare Farm Vets aim to put your mind at ease – providing total solutions from a single source. Competitive quality services; personalised to the requirements of each client.
View all posts by Molecare →

Lungworm – are you thinking about it?
Mastdecide – the new on-farm Mastitis test