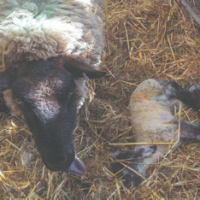 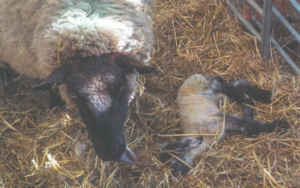 Infectious causes of abortion of sheep in the UK is a very important issue to tackle. Infectious causes of abortion are very common and not only do they contribute to serious economic losses, many of them (including the two most common) can also cause abortions in people. In this article, we will cover Enzootic abortion and Toxoplasmosis, both of which are very common across the country but can be effectively controlled in a flock via good biosecurity practices and vaccinations.

Enzootic abortion (EAE) is the most commonly diagnosed infectious cause of abortion in sheep in the UK and it is caused by the bacteria Chlamydophila abortus. It is usually introduced to a farm via brought in stock carrying the infection. The bacteria is shed in abortive material (e.g. placentas/foetuses) in large numbers meaning any other sheep coming into contact with this are likely to also become infected. However, the disease is not apparent as newly infected sheep can abort in the last third of their pregnancy the following year. If the majority of a flock has not been exposed to EAE in the past and subsequently becomes infected; it can cause abortion storms which typically affect 25% of the ewes. A flock which has had EAE present for a while may see rumbling losses of about 5% each year. EAE is quite difficult to control via management as it is shed in such high numbers, susceptible animals become infected quite easily but there are some important measures to take to help limit its spread within the flock:

The best way to control EAE in a flock is by only buying from accredited flocks and vaccination. Enzovax is a vaccination which can be given into the muscle or subcutaneously at a dose of 2ml per sheep. This vaccine needs to be given at least 4-weeks before tupping and no more than 4-months before tupping in order to give effective protection. If a ewe is already infected with EAE before she is vaccinated, the vaccine may limit the effects but it will not afford full protection from abortion. In the face of an abortion storm you should:

Toxoplasmosis is the second most important infectious cause of abortion in the UK and it is caused by the protozoa Toxoplasma gondii. Cats are the main host for the toxoplasma and sheep usually become infected with Toxoplasma by ingesting cat faeces containing the Toxo eggs. Toxoplasma can cause abortions, mummification, reabsorption and weakly born lambs depending on what stage of pregnancy the ewe is in when she becomes infected. Although it can help to only keep adult neutered cats on a farm realistically it is very difficult to control the movements of cats and so the best method of control for Toxoplasma is via a vaccination. Toxovax is also a dose of 2ml per ewe and is given into the muscle, it should be administered at least 3-weeks before tupping and no earlier than 4-months before. Toxovax can be given at the same time as Enzovax however they should be administered at different sites. If it is felt that a booster is required the vaccination can be repeated after 2-years.

Molecare Farm Vets aim to put your mind at ease – providing total solutions from a single source. Competitive quality services; personalised to the requirements of each client.
View all posts by Molecare →
smaXtec boluses are “game changing” for Wiltshire beef farmer
Making milk whiter than white